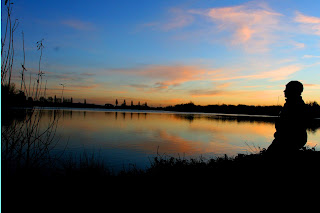 The main image shows a sad moment, as I was watching the water at Westhampnett, one of my favourite water at first light on a frosty Tuesday morning thinking whether to believe the reports that the fishery had lost its population of perch. Although the weather was far from ideal, when I packed up after fishing for seven hours, through what is usually the best feeding period, I was still asking the question.

Up early again on Tuesday, this time for a chub guiding day on the river Loddon. The journey took slightly longer due to a heavy flurry of snow at fleet and with temperatures below freezing most would have abandoned the trip, yet past knowledge gained has told me that, even in the coldest conditions, if you can get a bait in the water, then chub will feed. Neal had arrived moments before me and as we crossed the bridge and looked at the river, my heart sank slightly as the expected green tinge had been replaced with a weak tea colour.

Neal hadn’t fished a river for over a decade and wanted to try something different and although I know the river well and have total faith in my tactics the thought of struggling myself a couple of weeks ago was clear in my head. Getting of to a good start was what was needed and I knew just the swim.
Walking across the frosty fields bought home that winter had finally arrived and after a brief explanation of the simple bread flake rig we made our first cast. Ten seconds past when the tip twitch, pulled round but Neal’s strike met thin air. Second cast the same happened but the third bite saw the rod bend over and after a brief fight Neal netted a chub weighing 4lb 8oz. A forth cast was chanced yet just the occasional twitch showed that more chub were around, yet as l have come to expect, once spooked they are difficult to tempt on such a small river. Although Neal had a whole day to learn the basics to fishing bread flake, l can honestly say that he had done this in less than half an hour!
The next swim drew a blank, yet the third produced another four-pounder, a right result on such a cruel day. The forth swim, another banker failed to produce, yet with a large mink working the swim, this didn’t come as a surprise. It was now time to move around spending ten minutes in every likely looking spot before dropping back into the first swim, this time with cheese paste. Unfortunately our efforts and bait changes went unnoticed as did a spot of float fishing through a known chub hotspot. Obviously it was one of those days when the bait had to be placed right on a chubs nose and with a banker swim well downstream, on another stretch, we decided to move. 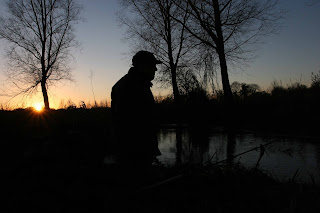 The snow filled clouds had now disappeared, replaced with a warming sun, however approaching this new swim in a stealthy manner, due to the sun sending long shadows across the river was impossible. Sitting in a swim with two shadows visible on the far bank and knowing the bait is right below these does little for the confidence, yet amazingly the tip twitched, pulled round and the third chub of the day was safely netted. Two more swims were tried, one of which was ruined by a pair of swans and with the sun and temperature dropping away we called it a day.
What a contrasting day, far from ideal, and extremely cold, yet with three good chub netted in fantastic countryside hosting an array of wildlife l was hoping that Neal had been converted, and when he mentioned he couldn’t wait to get back, l knew we had both had a great day.

A few words from Neal…
Dear Duncan. Thank you for another superb days guiding. Despite conditions being pretty awful I still managed to catch some decent chub.
Once again you've opened up another angling door for me. I shall be returning to the Loddon for some more winter chub fishing very soon.
Great teaching and great company!
Regards Neal.

I was looking forward to a guiding trip to the Itchen at the end of the week and imagined the river to be perfect, yet once again on arrival l was shocked to see it high and fast. Luckily the river was running clear which gave us a fighting chance, yet with a North West wind gaining in force by the minute we soon realised that catching on the float would be difficult, even for an expert on the pin. 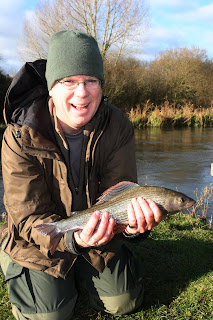 Mark had never caught a grayling before and not having fished the float for a while and only using his centrepin on a few occasions soon got into the swing of setting the float on its way and feeding, yet the banker swim of previous weeks only produced one bite which was missed. Finding a slightly sheltered swim Mark soon was bent into a fish, the first of numerous brown trout but we were of the mark and confident of a grayling or two. With a couple of other anglers uncomfortably close on such a long length of river we decided that it would be us that showed the correct etiquette and moved upstream to a pool that holds plenty of fish. Impossible to fish the float even in normal conditions we decided to put the feeder into action and within seconds the tip twitched and a brown trout was netted. More followed before a Mark found himself playing a fish that felt different and he was right as a grayling of around a pound six graced his net. A few smaller pencil grayling followed along with trout before the swim died, yet as l was wondering upstream to look at other swims l heard Mark shout and saw him netting what looked like a good grayling. Weighing 1lb 11oz it was a great personal best and a good fish on a difficult day, yet Mark wanted to catch grayling on the float and pin, so we headed back to the swims fished earlier in the day. Whilst Mark fished the float, I tried the feeder getting bites in most swims, yet it seemed a moving bait wasn’t what they wanted as Mark was struggling. Moving from swim to swim we finally had a grayling taking maggots up in the water and as the float made its way downstream soon disappeared and Mark’s first grayling on the float came to hand. Strangely it seemed that as the light faded the grayling switched on and more followed which was the icing on the cake after an enjoyable day even though river conditions were far from perfect.