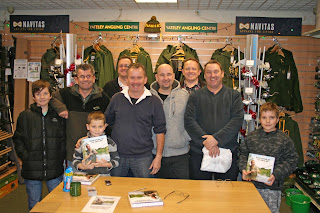 The week started really well with a book signing day spent at Yateley Angling Centre. It was good to see such a diverse range of anglers interested in the book as well as catching up with some old friends that I hadn’t seen for a while that took the time to pop in. It would have been great to catch up with Ruth but she couldn’t make the day, I’m sure she had heard that I was going to ask her for £25 for every time Yateley Angling was shown within the book. A big thank you though has to go to Ruth and the guys in the shop for their hospitality as well as stocking the book, so if you want a signed copy then they have a few, but hurry they wont last forever.

Sunday was spent earning some brownie points and Monday in the office catching up on the paperwork that was piling up, yet the rest of the week was to be spent on the bank fishing, albeit mainly with customers. The weather however was doing its best to spoil the fun, yet a day on the Itchen with young Jake was rewarding with plenty of fish coming to his net. Unfortunately the river is really high and racing through and although Jake persisted using the float and centrepin, it was obvious that the feeder would score better and after taking around ten fish which included grayling to over the pound as well as trout he swapped to the feeder in the afternoon. Fishing one of my favourite swims he was soon into fish, the highlight a personal best grayling weighing 1lb 13oz, or was it the very large pike that struck a grayling on the far bank, three times (one for the future).

The following day I was meant to be back, but with the fishery closed for its annual Christmas shot, Adrian and myself headed to another river, this time with dace and roach on our mind. The weather took a turn for the worst, yet we luckily managed to avoid this and come the end of the day Adrian had been rewarded with numerous quality roach to 1lb 7oz plus the occasional dace. The great thing again, was that Adrian wanted to use the float, so being a traditionalist I set him up initially with a centrepin which he mastered superbly, before reverting to an old close faced reel due to the lack of flow. Once again when we found the fish, predators were lurking and a couple of times one would be seen chasing the roach as Adrian hastily would it in.

Thursday the weather was diabolical and having two youngsters to watch over headed to Gold Valley in search of perch. Jake was once again with me along with his friend Simon and I had visions of the day putting them of fishing, it was that bad. Fishing the main lake we decided on a specialist approach and used either prawn or lobworm on running feeder set ups. The bleeps soon came, however these were from small fish but finally the bobbin started to head skywards, but Simon’s strike met thin air. The second chance wasn’t missed and he landed a personal best weighing 1lb 8oz. Although the rain was relentless I headed to another swim and started to drip feed this with red maggots before dropping a lobworm within. A couple of small perch raised my hopes but it was the silver fish flashing about that made me change the hook from a size 8 to a small 18. The pole float constantly disappeared and knowing I could catch the youngsters a few fish let them take turns. Jake being the gentleman he is always lets his friend have a go first and with Simon catching a few good rudd finally handed the rod to Jake. It wasn’t long before Jake called for my assistance and seeing the rod bent over fully expected to see a carp on the other end, so when a big perch surfaced quickly dropped the net underneath it. I could see the joy on his face as perch have been the one species that have eluded him and when it went 2lb 9oz knew he had broken the spell. As the light faded more perch followed and come the end of the day when it was time to wind in I could see that neither wanted to. 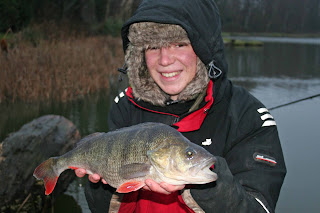 I was hoping to head to the river Wye on Friday, yet I don’t think I’m destined to do this, this side of the New Year so will just have to wait, but with loads of things to catch up with, spent the day doing just that.
Wishing everyone a fantastic Christmas and rod bending New Year.
Posted by Unknown at 08:35