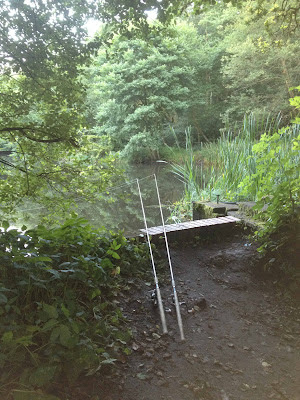 This blog goes out to all the anglers that are struggling. It’s not you, it’s just a really bad season and this week pretty much sums things up.
Let’s look at my week. On Monday l headed to Woodlands View Fishery near Worcester for the Korum winners day. These lakes are stuffed full of fish and five hour matches are often won with ton plus bags. I was asked to fish and decided to try the pellet waggler, a tactic that l have started to really enjoy. None of the other anglers were fishing this method and it didn’t take long for the F1 to start falling, however after an hour or so things toughened up. All the other anglers were now catching, however you couldn’t call it hectic, yet it was an enjoyable day out only ruined for the few stragglers that stayed behind, as once again the heavens opened making us run for cover.
On Tuesday l met a friend and we headed to the river Kennet at Burghfield. Now this stretch has always been kind to my short session bursts, yet today we fished from noon until 11pm for just one modest chub to show for our efforts. Once again the heavens opened and for the second day in a row l got soaked. It may surprise you but Burghfield is still fining down from the heavy rains back before the start of the season. I classify the Kennet, just like the Loddon as a river that will rise and fall very quickly so for it to still be fining down after rain that fell many weeks ago, leaves not just us anglers, but also the fish in complete disarray. 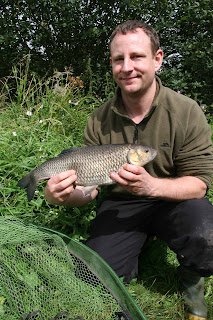 I managed to get in bed around 12-30am and when the alarm woke me at 5am l was hoping that an early morning with a customer on a stretch of the Loddon that l thought l knew like the back of my hand would produce. Wrong, as after covering all the known hotspots using a method that rarely lets me down, he only managed one positive bite, which luckily he converted into a modest chub. The confusing factor during the morning session was when we arrived; the river was gin clear, however after a couple of hours it coloured up, only to clear again when we called it a day at lunchtime. Thinking that the fish were just off the feed due to the conditions, we were stunned to watch a group of four barbel, in a no fishing area, intercepting free offerings of pellet paste before it could reach the bottom, and where they were was just a couple of feet deep.
That evening l hit the sack around 9pm, however the alarm sounded at 1am as l had agreed to pick some friends up from Gatwick. I finally got back to bed at 3.30am only to awake at 6am as l was meeting Roy Westwood from Anglers Mail to shoot a feature on Stillwater watercraft. After dropping the girlfriend of at work we finally met at 8am at the Badshot Lea complex. There was absolutely no wind and with a hot day forecast we felt that catching a fish for the feature was going to be difficult, especially as we were to shoot all the pictures prior to angling. At around 11am l located some carp and scaled down my approach too a hair-rigged Sonubaits 8mm S-Pellet, plus a tiny piece of buoyant corn next to a size 12 Xpert hook. My hooklink was just four inches of 6lb Xpert Power Mono along with a 1.1oz K-Grip inline lead which was free running for a couple of inches before being stopped by a Rubber Braid Stop. I baited two spots, one in a shaded corner, plus one in open water with three Spomb loads of pellets, the same that l would be moulding around the lead. Dropping the bait into the corner l soon received liners, yet after twenty minutes felt the need to cast to open water. Less than five minutes later the indicator rose and a slow take saw me commencing battle with a deep slow moving fish which turned out to be an immaculate mid-double common. Looking at Roy we both smiled as watercraft is an essential part of catching and if you don’t try and understand what’s going on within and around your fishery, well then, it’s your loss. The feature goes out soon, so keep buying your copy of the Mail as it’s full of valuable information.
It was great to get home around midday, yet although knackered, l continued to sort out fishing related paperwork, finally running out of energy around 10pm.
Most of Friday was spent beginning to organise my guided sessions on the river Wye. I still have a few spaces available which are on Sept 5th, 6th and 7th for one angler and a day available on Wed 10th October. The cost per angler is £125 and includes the use of my tackle if required plus bait and day ticket. 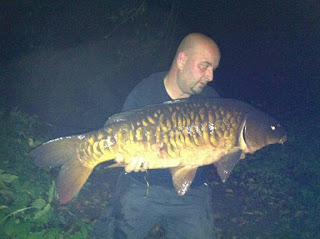 At 6pm l met up with another angler, Lewis Deeks for another attempt at catching some big rudd from Frensham Great Pond. When l arrived only Lewis’s car was in the lay-by and we’ve both have been around long enough to know this meant one thing, its fishing bad. At around 8-30pm Lewis departed, as a summer cold was making him feel ill and the lack of bites did little to take his mind of this. I stayed on till 10-15pm taking just one small rudd; along with missing a further four bites throughout the course of the session. A few fish were moving after dark, yet these weren’t concentrated in any one spot, just here and there, leading me to assume it wasn’t my location that was wrong, but Frensham just fishing appallingly badly.
A friend of mine, Steve Donut Ansell sent me a picture of a big carp he feel has never been caught before. He took it from a venue he chanced upon, deep in a wooded area on a couple of Sonubaits 8mm pellets and is one of just seven carp that live in the lake. Top angling, now go catch the others.