Barbel from the Wye 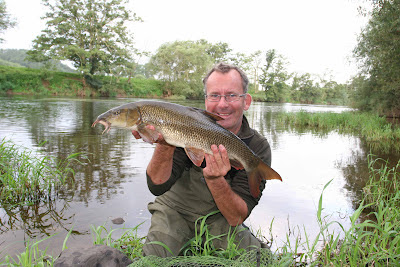 After dropping the girlfriend of at work at 7.30am on Wednesday morning, l headed north for the first of many exploratory sessions on the magical river Wye near Hereford. The sat-nav showed 147miles and a time of 2hrs 48mins, however even during rush hour l made good time and arrived at my first port of call, Woody's Angling Centre in less than 2hrs 30mins. Over a cup of strong tea, Woody drew a map of a swim he knew would hold fish on a stretch controlled by Hereford and District Angling; however this was to be left to the following morning as l wanted to return to a swim l fished last year, also controlled by Hereford DA at Breinton. Arriving at Breinton Church in torrential rain l then realised that l had left my waterproof jacket at home, so parked up and had a three hour afternoon snooze. Finally the rain stopped and after cooking a hearty Spaghetti Bolognaise on the stove in the back of the van l took a leisurely stroll along the river bank. I soon realised that this wasn’t going to be a stretch to take customers, as the banks are extremely steep and even a nimble chap like myself ended up in the water after slipping and dropping my chair that decided to float of downstream. Finally sorted, albeit bruised and battered, l finally cast out, however come 8.30pm it was obvious that the session wasn’t going to be as fruitful as last years morning session, as apart from one small barbel, just the odd swinger chub and dace came to my single 8mm S-Pellet.

Making the most of the remaining light l drove downstream and took a look around the water works, a much deeper and slower section, one that Woody had recommended when the waters up and coloured, yet with no angler fishing l knew that things weren’t happening here either.

A friend of mine was staying at Sink Green Farm B&B, the same place that l have booked into next month, so l headed here but not before finding the location of my morning g session. It was around 9.30pm when we joined up and over a cup of coffee that Sue the owner made and discussed what had been going on. Mark had been catching a few on a stretch revealed to him by the Wye master himself ‘The Pons’, yet as much as l tried to get the details from him he remained silent, fair play, however you wait until ‘The Pons’ gets back from his holidays!


It was around 10pm when l headed back to the van where l spread the sleeping bag across the seats and tried to get my head down, however I’ve been suffering with my ears since returning of holiday and with a bad infection struggled to get much kip. I could have crashed on the sofa in the B&B but in a strange way, l like to rough it now and again as these experiences seemed to remain in my memory longer. The alarm sounded at 4.45am, yet l was already awake and after a quick sort of the gear in the growing light headed a few miles downstream, albeit on the opposite bank.

The walk to the river consisted of a short walk along the road, up some steps, through a gate, along an embankment, through another gate, over a bridge and through a field of sweetcorn. This took a good ten minutes but it was a walk l had to do twice as on meeting the river l realised that the only way of fishing the swim was with chest waders as the deep gulley on the far bank had a thick bed of streamer weed protecting it which was positioned mid river, before this it was shallow gravel.
After sliding down the bank and adding to my bruises l was finally positioned mid river, albeit now nearly 7am. Not quite knowing what to expect l cast a double 8mm Sonubaits Crab Pellet ‘O’ into the gulley, placed the rod in the high rests and watched as the Quiver tip of my Korum Neoteric XS 12ft Multi Quiver Power gently swayed in the morning breeze. My hand hovered as the Korum 60gram Mesh feeder loaded with Sonubaits Hemp & Hali Crush momentarily dislodged, yet a few turns of the CS3000 saw this problem solved. Moments later a pull on the tip eased my worries, Woody was right, barbel were here. After ten minutes l reloaded the feeder and made another cast, only for a repeat performance to occur. Third cast thou there was no mistaking, as the tip bounced back in unfamiliar southern fashion, and on picking the rod and slack up, bent into a good Wye barbel. After a few moments of stalemate were she held her ground in the strong flow l eased across, however this is when the fun started as the bed of streamer weed was thicker than first thought. On surveying the swim, l knew that l had to make sure my end tackle was up to the job, so tackled up with a four foot hooklink made from Reflo 0.19 Power plus one of the new Korum Xpert Specimen size 12 hooks. Obviously this was powerful yet balanced enough to tame the barbel as eventually l managed to drop my Korum 30inch Latex Barbel Spoon underneath a mound of weed and engulf her. It was a great start and the next five casts saw a similar result, however by now l was getting the barbel up on top before the weed which made things so much easier. Although the action was frantic, l still had time to enjoy the wildlife of the Wye which included a barn owl working the morning mist, a grass snake struggling to cross the fast flow and the all too familiar call of a Buzzard as it climbed on the warming thermals.

With six barbel landed by 8.30am l was expecting a red letter day, (hang on, when was the last time l caught six barbel in a session, let alone in an hour and a half!) but the action suddenly stopped. The odd salmon jumped, yet l couldn’t buy another bite for at least an hour, but then two more followed quickly before one headed upstream and done me on a snag.
I could have stayed and caught more, but l had achieved what l had come here for, to find a swim that l could catch a customer a fish, and knowing this l headed back to Sink Green Farm to say my farewells before heading home. 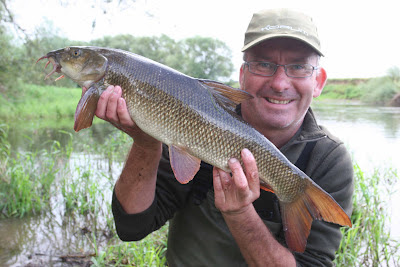 Although anglers reading this may think the Wye is easy, then think again. If you can locate the barbel then catching them isn’t a problem, yet getting to the swims that contain them isn’t exactly simple. There are very few comfortable swims like on the Kennet or Loddon here, this is adventure country, so be prepared!