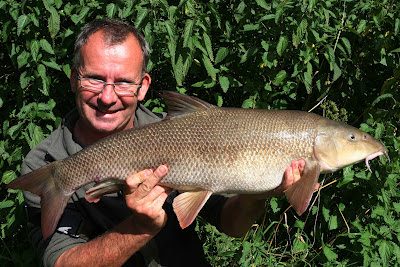 The highlight of the week thou was whilst guiding a new member on a stretch of the river Kennet. My task was to introduce a regular of mine Martin Farmer to the river and show him where l had caught barbel and chub from in the past. This would provide him with valuable information that would otherwise take hours to create on his own. The stretch was seriously overgrown, hardly fished and the river itself was coloured and motoring through. No other anglers were on the beat, so obviously l let Martin set up in what l consider the best swim on the stretch, one that had supplied numerous big barbel to myself in the past. Using the Method-Lead Martin religiously cast every hour in the hope that the barbel would switch on, however after eight hours the three-foot twitch failed to materialise. The only bite came from an over enthusiastic roach around the pound mark.

During the afternoon Martin had taken a stroll down the lower end of the stretch and as the river runs along a public footpath l had stayed behind to watch the tackle, refusing his generous offer for me to cast a line in the swim as this would have been tempting fate, however during the course of the day had trickled some bait into a swim just downstream, one that l had never caught from in the past, although tried on numerous occasions. 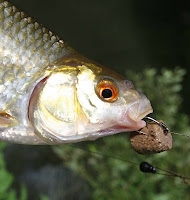 In hindsight should have sent Martin downstream to try this swim, yet that would have meant vacating the good swim, so with Martin fishing well, doing nothing wrong left him for an hour and wandered downstream myself. Casting an identical rig and bait into the swim l sat back and nodded of resting the rod but against my leg and setting the clutch just in case a bite came. It was literally on the hour and just before l had set the alarm on my mobile that l was awoken to three bites at the same time. Two were from mosquitoes that were tucking into my face, the other from a barbel that was heading downstream. It was on picking up the rod that l realised just how fast flowing the river was, yet the trusted Korum Neoteric XS 12ft Multi-Quiver with the 1.5lb tip added and 10lb Gardner Hydro-Flo main never let me down and after a few minutes another Kennet lump slid over the draw string. I then realised that l had just tied up my first hooklink made from Korum 10lb Xpert Braid along with using a size 8 Xpert Specimen hook, not a bad way to christen new products! Weighing 10lb 13oz it was what l classify as an opportunist capture and proof that big barbel can be caught in daylight. 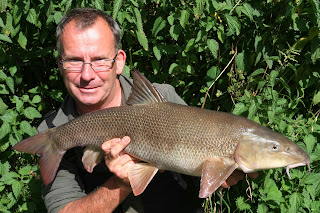 It was a shame that Martins tip didn’t wrap round, however it was all he needed to see to make him return and reap the rewards of a method that l have spent years perfecting, although l think we may just be about to take the method one step further. As if Martin needed any more convincing that the stretch he was about to fish held plenty of big fish, yet as he packed away, something very large pocked its head out of the water, as if to say, you’re turn will come.