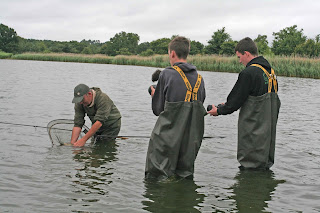 First question for the month is - who’s the dick head that stakes his bivvy down on the platform at Frensham with screws? Not a good idea at all, especially when they are left there for the next angler to either trip over or pierce the sole of his waders on, thanks!
Looking at my diary inputs I have only fished for myself on four occasions this month, a total of 44 hrs, yet these few sessions saw a big hit of crucains, rudd and a few spawned out tench down in Kent. Shame I was too late to capitalize on the Thames carp tip off. Guiding sessions also totalled four and were all successful in the 36hrs spent bankside. As you can see from my day to day diary, it’s been a busy month producing features again, not just in the office but on the bank too and along with other fishy related projects such as a ‘barbel teach-in’ I haven’t really had time to relax. 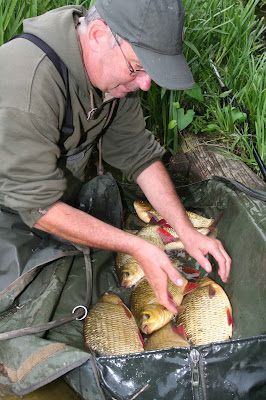 Probably the most rewarding session was the last one of the month at my beloved Frensham Great Pond with good friend Paul Garner as we were there to produce a video for Nash on catching rudd and tench. The camera crew, Carl and Alex were there to record the events and what can I say, a very enjoyable, knackering yet
productive session, everything I expected of Frensham. Hopefully the guys will have time to edit the footage and get it up for everyone to view soon. I will let you know when it’s finished and where it will be available to view.

Day to Day events.
09/07/16 – After a week’s holiday in Tenerife I was hoping for a couple of days rest just to get unpacked and back into the swing of things, yet not so lucky as after arriving home in the early hours I was back up at 5am and heading to Royston in Cambridgeshire for a Nash work party. Fortunately we managed to get more than expected done by mid afternoon and back home by 5pm. No need to say what I did Sunday.....
11/07/16 – A day in the office catching up on things.
12/07/16 – Another day in the office completing European articles as well as getting stuck into more AM articles. 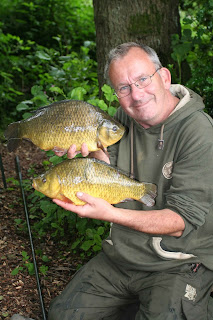 13/07/16 – On the road early, this time heading to East Sussex to produce an overnight AM feature at Wintons.
14/07/16 – Back home early from Wintons, then time spent getting stuff ready for the second FAS Barbel Teach-in on the River Loddon at Stanford End.
15/07/16 – Spent the day sorting out a few river Tactical Briefing for the Anglers Mail.
17/07/16 to 18/07/16 – Headed to Kent in the hope that the tench hadn’t spawned and that the banks would be slightly less busy. Sadly the lake we fancied was choked with weed and after arriving late and only having an hour to set up headed to an adjacent lake that both Chris and myself new well. The weed was far better and after baiting up and setting up camp it was time to set the alarm for 3am and gets some sleep. Chris decided to fish and managed his only tench around 1am in the morning whilst I fished hard from 4am – 11am for three tench and loads of annoying perch. Unfortunately the tench had spawned and were out of condition and well down in weight, my best was a shade under 7lb. Come 11am the heat, 28 degrees was becoming slightly unbearable and with the chance of another fish unlikely we knocked the session on the head and were on our way home by midday.

19/07/16 – A tip of from a friend regarding some carp on the Thames needed following up but due to my holiday a couple of weeks had passed since he managed a low twenty of the top! Once again our timing was out and apart from two upper doubles, that seemed uninterested in our bait we knew we had once again missed our chance and with the hottest day of the year forecasted (35 degrees) we once again left empty handed, but with a promise to return next year.
20/07/16 – The busy week continues, this time at Badshot Lea big pond where I was guiding a new customer, Michael Nice. Unfortunately the weather was scorching, 33 degrees in fact, just what you don’t want when targeting bream,
however although tough Michael did manage a number of good bream to around 6lb along with lots of small fish that were a bit of a pain. Fortunately Michael objective for the day was not only to catch fish but to learn some new tactics which he did along with a few extra bits due to the lovely weather. 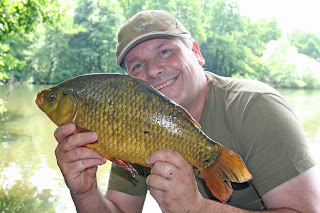 21/07/16 – I was on the lake come 5am with my customer John Merriman not too far behind. Setting up along the ‘chicken bank’ we started by spombing some bait out before casting over the top and waiting a response that took all of five minutes! You usually know when it’s going to be hectic as action comes quickly and fish can be seen moving and today was one of those as John proceeded to land numerous tench to over 5lb, the odd quality rudd to 1lb 12oz and maybe eight crucians, the best 3lb 3oz. My mate Chris had dropped into the swim next door and found himself right on top of the crucians taking fifteen to 3lb 4oz plus lots of tench.
On a sad note, John was hoping to remember the day for the fish he caught but unfortunately cant as after I left he decided to stay on till 11pm. Tired after a full day he left his rods in the car park, returned home and decided to unload the following morning which was when the heart sinking feeling set in knowing what he had done. The rods were found and rested against the sign but then disappeared. John said it was like losing his right arm when he found out so if the angler who found these is reading this then please take them to Apollo Angling and hand them in. It might be over a week now but no-one will think badly off you and I know John will be greatly appreciative of you. 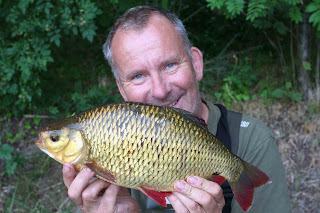 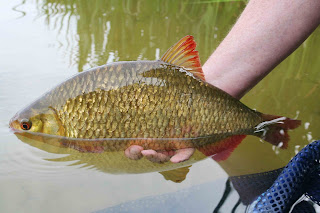 21/0716 – 22/07/16 – Guiding at Frensham Great Pond is never easy as the fishing is quite demanding so how I was going to keep going
after such an early morning was going to be tough, but as they say, no pin, no gain. Come 6pm Neal and I were set up and fishing, however a run of nuisance small rudd was just what we didn’t want. Tweaking our set ups to slow these down, yet still be in with a chance or f a big rudd or two was needed and just as the light was fading Neal found himself attached to a better fish. Now anyone who hasn’t seen a big rudd ( a two-pound plus fish) is usually shocked when one drops in the landing net and to say Neal wasn’t would be an understatement as his first words was what’s is it! Well it was the first of a brace of rudd, both weighing 2lb 8oz with myself taking one also of 2lb 8oz. I actually had to hit the sleeping bag at 12.30am and cast out small pop-ups which went unnoticed whilst Neal worked the rods all night. To many this may seem just too much effort, yet if you want to catch such magnificent fish then fishing right through the night is what’s required.

23/07/16 – The first of two full days in the office getting on top of things.
26/07/16 – Another full day in the office completing three articles for Anglers Mail, before sorting the tackle for a guiding day at Enton in the morning. 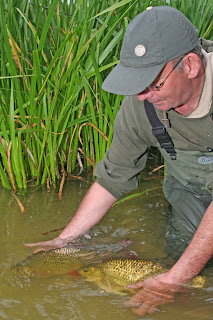 27/07/16 – Today I was once again guiding Ron at Enton. After our last session in-which he bagged himself numerous big crucian to 3lb 10oz he was in need of a morning practicing his casting, however a stiff westerly put paid to this and although the conditions looked fantastic the lake had other ideas as a friend
who had carp fished the night before said that very little was showing or being caught. Spombing some bait out we cast our rigs over the top and awaited a response but as told, it was long in coming. In fact after a couple of hours I decided to get Ron to cast a rig much further out and this seemed to work as the first of seven tench to 5lb graced Ron’s landing net. It just seemed that the fish didn’t want to move over a bed of bait and the tactic of fishing for one fish at a time worked far better. Early afternoon we call time on the session, promising to return when the lake was fishing better. On the way home I quickly popped into the Gardner Tackle office to sort a few things out before returning
home to start getting the tackle sorted for a night at Frensham with Paul Garner where we would be shooting a video for Nash with Carl and Alex. 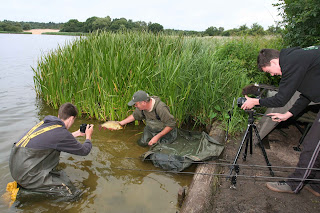 28/07/16 – 29/07/16 – Arriving and meeting Paul, Carl and Alex at Frensham at 1pm we headed to what’s known as The Oaks swim as this was very social and usually good for a few fish. The target for the night was rudd and then tench from first light. Can’t say too much about what we caught but let’s say it was a resounding success with some quality fish caught. As soon as the video is available to view I will post a link so that you can watch.
30/07/16 – Office duties call. 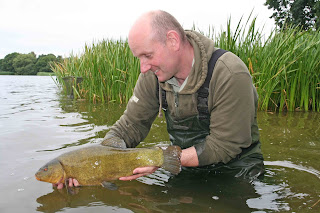 August is usually one of those months when the fishing can be hard going, so although its already looking to be a busy month, I’m going to take the pedal of the gas as for my own fishing, get on top of a few other areas needed at home as well as get ahead of myself with features as when September comes, well it’s time to start thinking big fish again.
Posted by Unknown at 10:50