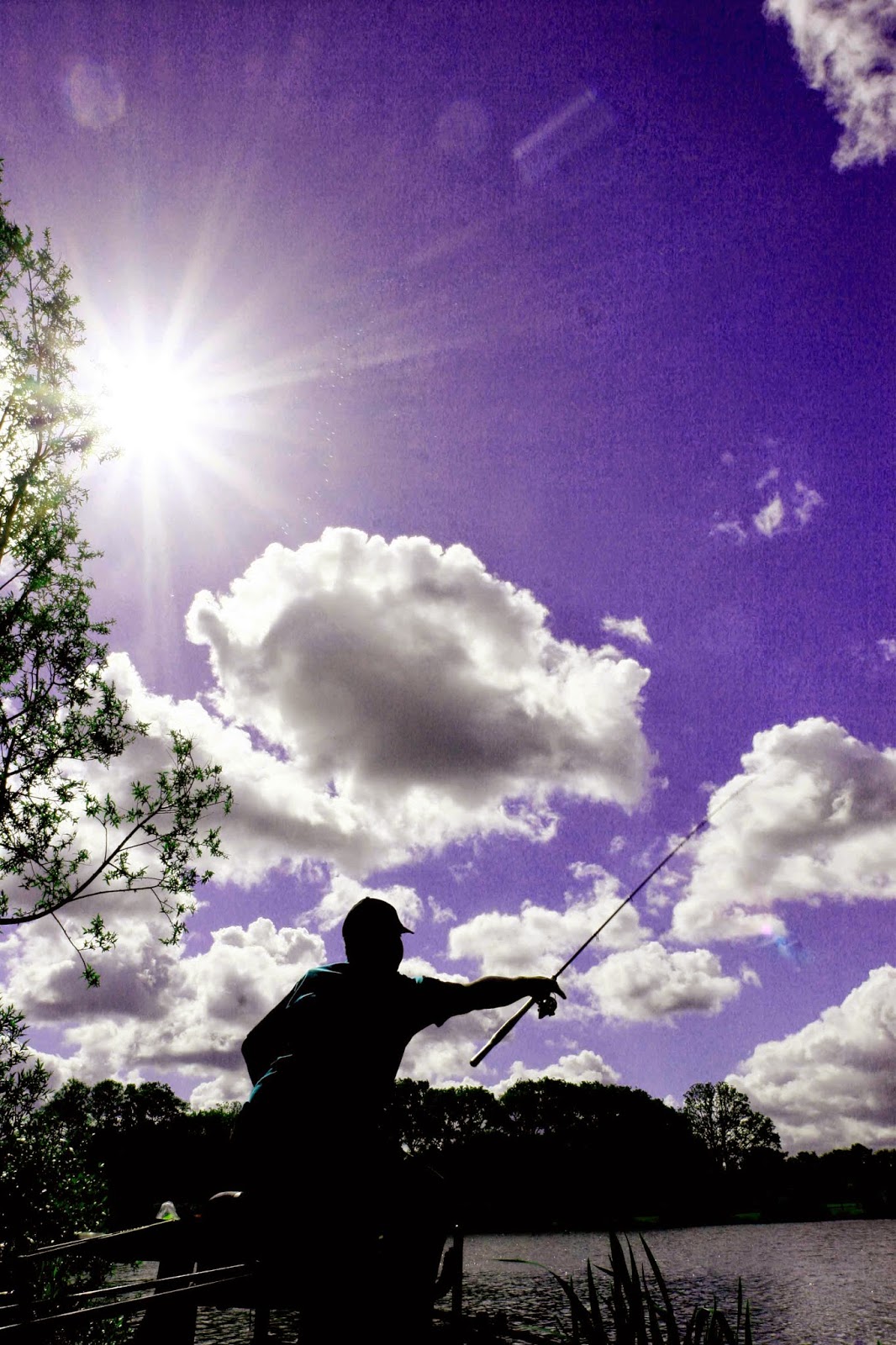 Alan Chadbone was just like any other youngster with a love for fishing then at the tender age of 19 he was knocked of his motorbike in London. With life threatening injuries he unfortunately lost the use of his left arm and hand, yet he knows only to well that this accident could have been so far worse with the threat of complete paralysed looming.
Undeterred and with a will to continue fishing Alan found himself back to square one and had to lean the art of fishing all over again. Finding a solution to almost every problem and with what can only be described as extraordinary positive mental attitude slowly but surely he mastered the art and now is part of Team England’s disabled team. For more than five years Alan has travelled abroad to represent his country and this year will be fishing Italy’s River Tiber along with England’s ladies and veterans.
He also fishes for Adventure Angling Society and can be found competing against able bodied anglers on venues such as Willow, Gold and FLE. He is an inspiration to every angler in this country and has to be admired in overcoming what has to have been a truly traumatic experience.

Anglers Mail Rating: A strong cross wind will cause problems but work ethics and faith should prevail.

09:00
Everything looks as if it’s going to plan from across the lake with Alan already set up in per 37. His choice of swim is for two reasons, firstly there is a strong westerly wind, far too strong to be facing directly into and although it’s coming across the chosen swim it’s forecasted to ease as the day progresses. Secondly there is a gravel bar around thirty yards out rising to around six feet, a sure patrol route for any hungry carp.
Although things look calm things for couldn’t have started worse for Alan as he shows me the broken tip of his Diawa Spectrum Competition 12ft Pellet Waggler rod. ‘Its going to be one of those days’, comments Alan who openly admits to have broken more rods and poles than he cares to remember.

A quick look at Alan’s bait tray shows that he has four options for the session, 8mm and 11mm Skretting Pellets, high-viz barrel pellets and good old sweetcorn. ‘Skretting Pellets are ideal when fishing the pellet waggler as their low oil content makes them sink slowly, they also breakdown slowly without splitting too easily so they withstand plenty of casts and often stay on after a capture. I’ve also bought some brightly coloured pellets and sweetcorn which are great if things go quiet and often a change to one of these during such a period can bring an immediate response’, Alan remarks. 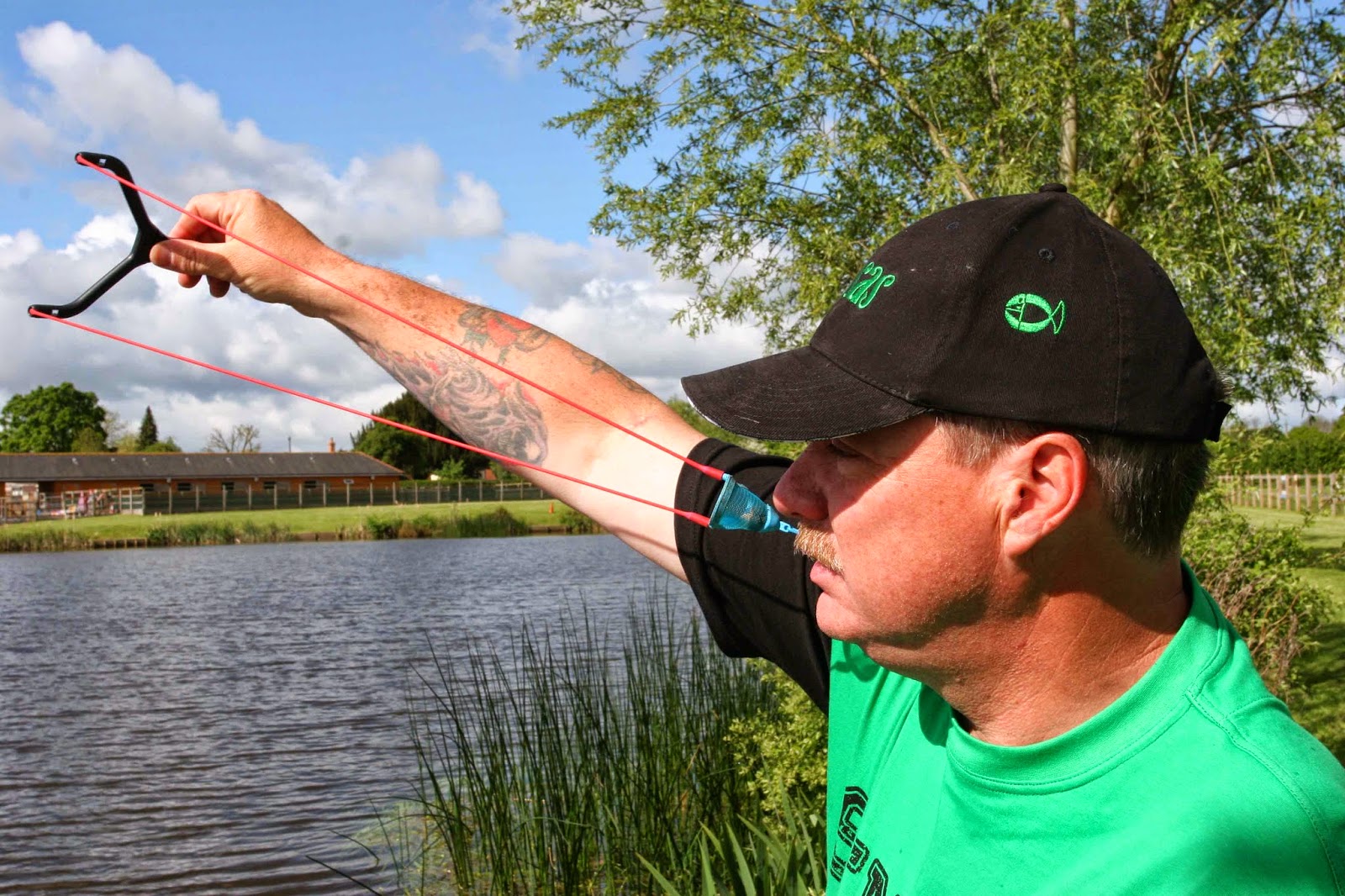 ‘The key to catching on the pellet waggler is firstly to have faith in the tactic but more importantly to feed regularly. We’ve all heard of feeding ‘little and often’ and here little means maybe six pellets at the most, and often means landing these accurately around the float every few seconds’, he reveals.
Its all well and good an able bodied angler catapulting pellets accurately but how is Alan going to feed with only one hand, I'm intrigued however I needn’t have worried as Alan proceeds to place the handle of the pult in his mouth before placing a few pellets in the pouch. He then takes the pult out of his mouth, grabs the cup with his teeth before stretching the elastic and firing his loose feed within inches of his float.
‘One thing that I have had to overcome is the fear of the elastic breaking. It happens all to often and instead of getting sore knuckles I get stung in the face, oh for the day someone produces a catapult that doesn’t break’, he smiles.

09:17
Expecting it to take maybe an hour to get the carp feeding Alan sets his float initially at five feet, just above the gravel bar and has the intension of maybe taking a couple of feet of this later in the day as the fish become confident. He is soon into a routine and is managing to land half a dozen 6mm pellets around his float every seven seconds! The wind is causing a few problems and the drift is making it more like trotting a river than fishing a lake even with the line sunk. Then unexpectedly after just ten minutes the float disappears and Alan instinctively strikes. ‘Well I didn’t expect that so quickly’, it must be what is known as a ‘mug-fish’, one that’s straight on the bait without any care in the world for being hooked. Hopefully it’s the sign that the pellets falling through the swim are doing their job’, he comments.

09:23
Alan’s disability has obviously created many problems over the years with winding a reel being one of the most noticeable. ‘What I’ve had to do with all my reels is cut the handles off as they get caught on my fingers that I use to turn the handle when playing a fish or winding in. I also prefer to play a fish using the backwind facility as opposed to the clutch as I feel far more in control’, he explains.
Everything about Alan’s technique is smooth and controlled and it’s difficult to see at a glance that he has such a major disability. Casting out and with a flick of a finger he closes the bail arm, places the tip below the surface and with a sharp rise of the rod sinks the line, then picks up the catapults and resumes feeding whilst all the time anticipating a bite.

09:54
Having only fished Watmore Farm once before, that being quite a few years ago, you can see that that first fish was a relief and Alan settles into a routine of feeding and casting yet although the float is showing signs that fish are responding to the feed, thirty minutes pass without a proper bite which gives us plenty of time to discuss Alan’s terminal tackle.

‘I’ve set up two similar rods today, the only difference is one has a 6gram Polywag float attached, the other a 15 gram and the mainline on both is Shimano 8lb Technium. Luckily I’m getting away with the 6gram set up, which allows me to cast past the 30yards I’m fishing, then sink the line, its also not far off my limit on catapulting distance for 8mm pellets. The float is attached to my mainline using a Mosella style attachment which allows me to change the depth very easily and I have no shot down the line as I want the pellet to look as natural as possible’, Alan reveals.

10:03
Alan has a unique way of grabbing the line, even in this strong side wind and that’s by catching it in his mouth and has now started to strike at the small dips and lifts of the float which soon pays off as the rod once again bends over.
‘These fish are in a strange mood today. Often the rod just bends round and the reel starts to spin during feeding, yet for some reason their just mouthing the pellet. This one feels like a better carp than the first five pounder, oh yes it’s a nice common, maybe scrapping ten pounds he comments.

All the time Alan has been playing around with the depth he fishing his hookbait, even taking it down to 6ft which is close to the bottom, yet most fish have come around 4ft showing that the stiff breeze is making them reluctant to come really shallow.

10:28
Two more commons grace Alan’s net in the next twenty minutes, yet neither are the standard wrap-round bites often expected with the pellet waggler, just the float disappearing for a split second and a quick strike being required.

‘One thing that I struggle with is tying hooks, especially the knot-less knot and I rely on a friend to keep me supplied with plenty. My end tackle today consists of a 0.20mm hooklink with a barbless size 14 Preston PR36 hook along with a braided hair with a pellet band attached’, he explains.

11:58
For the last hour or more carp have graced Alan’s net on a regular basis. Most carp have taken an 11mm pellet, even though its 8mm he has been feeding. The fish seem to be mainly hard fighting commons between 3lb and 5lb with the odd larger sample thrown in.
‘I’m amazed how few anglers know how a fish reacts when you slacken off, basically it simply slowly sinks which is great as it allows me to rest my landing net on the surface and draw the fish over. It’s another problem that needed overcoming and a couple of claw style pole supports attached to my seat box station allow the net to rest on the lakes surface then drawn backwards so the fish can be unhooked’, he remarks.

12:46
‘For some unknown reason the swims has died over the forty minutes or so. The floats been lifting and dipping, it’s as if I have some other smaller species like roach within the swim. I’ve even tried fishing a bright coloured pellet and the ever faithful sweetcorn but the bites are the same’, Alan comments.
Then out of the blue the rod bends round and the reel starts to churn in proper pellet waggler style. This happens a couple of times before the forecasted storm clouds start to build on the distance horizon and Alan decides that his long overdue session to Watmore Farm needs to come to an end.
‘No need getting wet and ruining a wonderful, thought provoking session, now time for some rod rebuilding’, he grins. 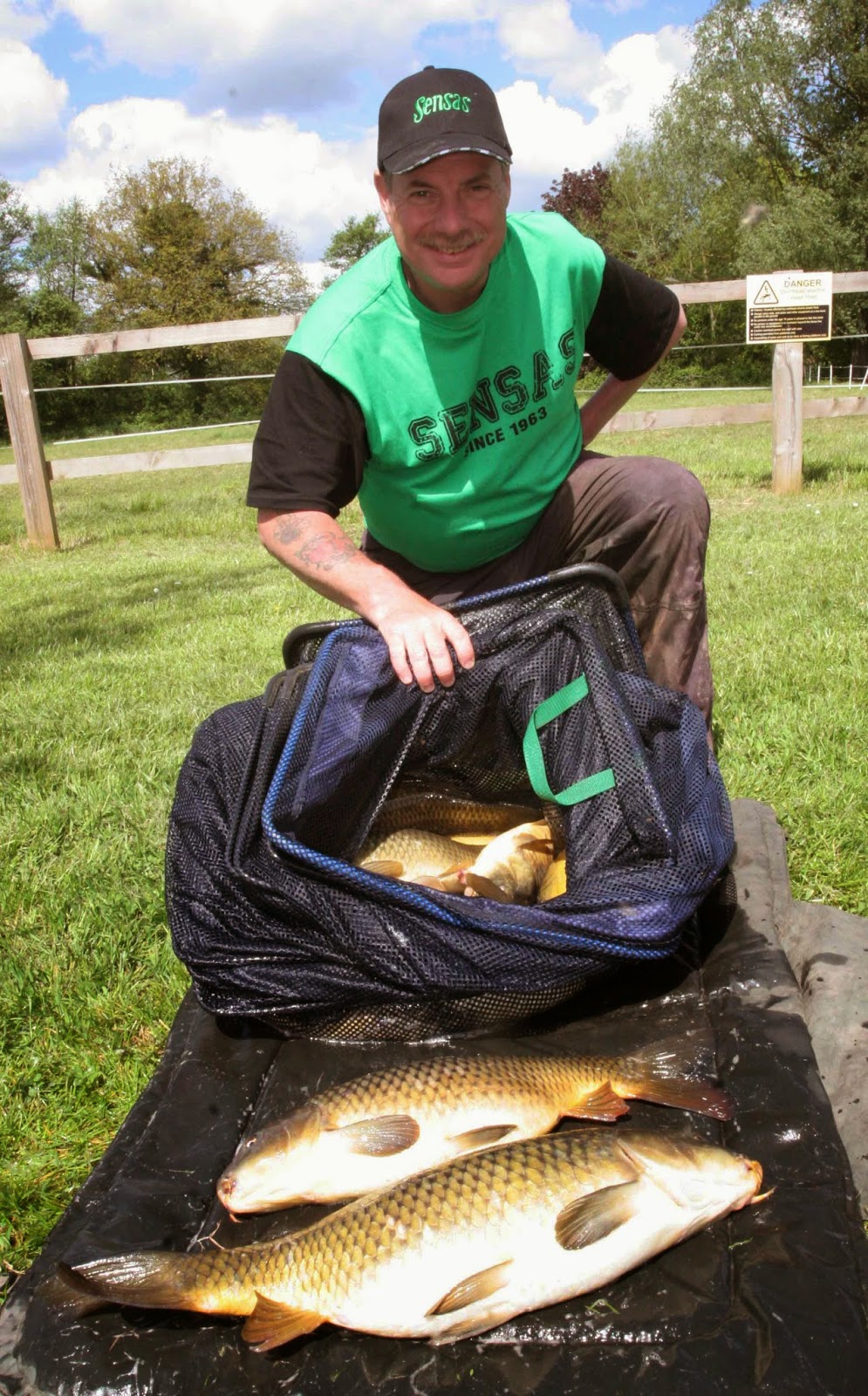 The session is over in less than four hours and its only when Alan tries to lift his keepnet out of the water that he realises just how bigger weight he has built up. With around a dozen or more carp landed Alan may well have under estimated the average weight of each fish and guesses that there is around 70lb of carp in the net.
‘It’s been a strange session, slow and frustrating at times but then hectic at others but by ringing the changes I’ve kept the fish coming. This method is certainly not for the lazy angler and the more you work at it then the more rewarding it will be. These carp really do hang-on in here and my arms now aching, I’m certainly going to sleep well tonight’, he comments smiling from ear to ear!

Top tips -
1. Less is more. Five or six pellets every few seconds is far better than a big handful on a less frequent basis.
2. Make sure you take plenty of spare bait as on occasions you will need it.

3. During quiet spells try a bright coloured pellet or a piece of sweetcorn. It often catches a curious cagey fish.
4. Constant use can see the weighting text lost on a float so try writing this on using an indelible pen.

5. A little gizmo that will make placing a pellet on a band so much quicker and easier is a pellet-bander.