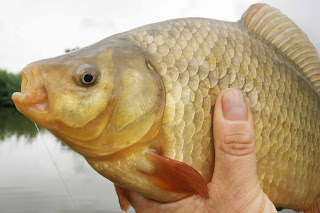 Having spent the week on the Wye and with the girlfriend being off on the weekend I felt it best to leave any fishing related jobs to Monday.
Monday came and it was the start of a long and strenuous job of manipulating a friends wedding that I had taken before leaving for the Wye. I was hoping to get things sorted before, yet it never happened and if their was one thing I needed to get out of my head was this specific job. All in all the images took the best part of three days to complete so getting out on the bank just never happened. I did manage to tidy up all the tackle from the Wye though as well as getting my weekly report completed.

Thursday came and my good intensions of heading up to the river for a few hours barbel fishing failed to materialise so I contacted my friend to see if he was up for a bit of late season crucian fishing. Another day in the office going through countless emails finally saw us meet late in the day, 6pm in fact for a few hours into darkness. The weather was on the turn yet we managed to fish to 10pm and although the fishing was tough, probably due to an algae bloom Chris managed a couple of crucians including a personal best of 2lb 13oz. All I caught were a couple of tench plus a rudd even though crucians were rolling. Looking at the crucians they are still lean, being caught all around the lake, albeit not in great numbers so haven’t shoaled up and started to feed heavily for the winter, so I will have to keep my eye on the venue closely in order to time my arrival to coincide with this. 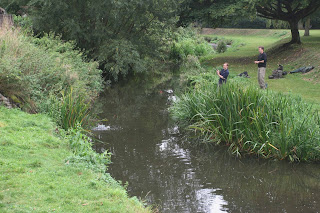 Friday was forecasted to be a washout with a band of heavy rain crossing the country yet its predicted arrival was somewhat premature. Arriving at Harris Lake on Godalmings Marsh Farm Complex at 8am I met up with Chris and Robbie, new members to the club and ones that were interested in the big crucians this complex is renowned for. Not wanting to go straight onto Enton they had hired me for the day to show them the method I use on this complex, the Groundbait-Lead. Setting up half way down the railway bank my mind drifted back to the glory days when this lake was packed with glory seekers searching for a 4lb crucian, yet today it was deserted. Fishing just one rod each and after being shown the mechanics of the rig Robbie was soon into a fish, a crucian. I had told the guys to expect twelve tench to each crucians, yet I was to be proved wrong as the morning session produced numerous crucians to maybe just over 2lb with just three tench showing. Seeing these small crucians gives me hope that they are doing well again, finally getting a foot hold and natural balance against the hoards of tench that have been introduced over the years. More hope came when talking to one of the club officials as he said the club had plans to try and get the lake back to its former glory which if they can do will at least take some pressure of Enton. Come 1pm the lake had died so we decided to head to Farnham and rove the meadows with a centrepin and pint of maggots in search of some quality dace. Starting on the west side of the town we soon found a few dace and chub, the later being somewhat cagey in the clear shallow water along with the odd wild brown trot. Robbie had never used a pin before so it was great to see him soon getting the hang of things, which almost came naturally as these guys are used to casting flies at trout. Moving downstream we finally settled in one of my favourite swims, however looking into the swim I couldn’t make out a single fish, yet a handful of maggots soon had a big shoal of dace showing themselves. I was expecting the guys to maybe catch half a dozen dace before they spooked, yet I was wrong as these seemed seriously hungry fish, as if food had been lacking over the summer and come an hour later at least two dozen had been caught, the best pushing 8oz. It was a great ending to the day and as we said our farewells in the car park the heavens opened and the earlier rain that had been forecasted decided to let rip.
Posted by Unknown at 02:52