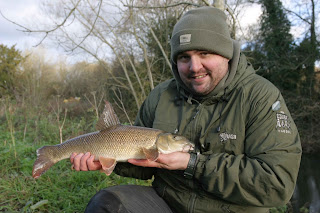 Chub fishing on the coldest day of the winter so far. 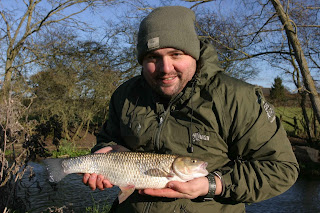 Yesterday was raw, in fact it didn't get above 2 degrees all day and the frost that covered the ground in the morning was still around in places come dusk. The chilling N/W wind and high atmospherics would have given us some fantastic odds on blanking but new customer Ryan wanted a big chub and if one species was going to co-operate then this would be it, or would it! Cheese paste was our first bait tried and in the forth swim a bite finally came from a pike! We then switched to bread and managed another bite, this time from our chosen species a chub but around 4lb lighter than our hoped for five pound plusser! Before progressing we were also on a difficult stretch where two bites would normally see a big chub in the net so we were doing ok, just wrong size and species. A bigger chub did come later in the day and after roving through numerous swims yet at around 3lb 8oz it was still slightly short of our target. Then in the last swim before settling down in a known big chub swim and sitting it out on paste Ryan hooked something that felt like the real deal and on bread we both had hopes of our target fish, yet unexpectedly a barbel around 3lb 8oz popped its head up!
No more action came yet on a hard stretch and on such a difficult day to get four bites was a result and I'm sure that Ryan's next four bites will see a five pound chub grace his net.
If you fancy a guided day learning a few tricks for chub or any other species then email me with your request - duncancharman@me.com 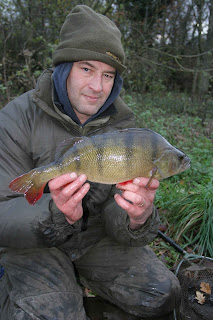 Customer lands personal best perch.
Alan, a regular customer of mine wasted no time contacting me after seeing that I had located what could be a perch gold mine and knowing I was confident of beating his previous best, a mid two wanted to 'strike when the iron was hot so we headed out, once again on a raw winters day to see if I could produce the goods for him. As you can see from the pic's come the end of the day he wasn't complaining as he now has a best of 3lb 4oz!
Fancy a day in search of a big perch? Well just email me and I will let you know the cost of the day and dates that I am free - duncancharman@me.com
Posted by Unknown at 10:24