Keep going and you will succeed. 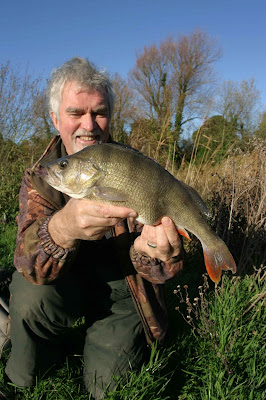 Keep going and you will succeed.
The last few days have not been easy especially if its perch that you have been after. My latest customer John, a regular over the last couple of years had never targeted perch by design so we booked a day and headed to one of my more consistent venues. The weather was once again against us, high pressure, blue cloudless skies and a really brisk cold north west wind. I took a risk and headed to a lake on the complex that I had never fished due to reliable information from fellow angling informative s yet two hours in and just one F1 that took a liking to Johns prawn I felt a bit under pressure. Fortunately the next bite came from our target and weighing 2lb 5oz gave John a respectable personal best. An hour later and with the sun across the swim I made the decision to move onto the main lake, yet after a couple of further swim moves we just could not buy a bite. It was time to scale it down, first to a small piece of prawn on a size 12 then after no bites to a size 18 and double red maggot. Another move bought a swift response from a skimmer followed by a modest roach before John lost a good fish that he was sure was a perch. The light was fading but in true perch form they went on a quick feeding spree in which John managed four perch, all around 2lb along with losing a couple. Would we have caught on the prawn, I don't think so, its just about reading the conditions/situation and making the right decision, something I think we did on the day. In the hope of a much bigger specimen we watched the float through the light of our head torches but it wasn't to be but at least we missed the traffic home. A tough day and from the time we left home to getting back we were out thirteen plus hours, however many would have thrown the towel in far sooner!


Here are a few words I received from John..
I've been using Duncan as a guide for just over a year and it's been my best fishing investment ever. With his knowledge, guidance and encouragement during 2017 I've managed to catch 12 pb's topped by a 3lb 12oz crucian. It's been his inspiration that has improved my fishing skills and driven me to explore new fisheries and species that have resulted in my new pb's. Many of these fish I've never previously set out to target but with my new found skills zander, tench, roach, dace, golden orfe were caught whilst not being guided by Duncan.
I therefore can only highly recommend him as a guide and angling companion. Booking him for "A Day Out With Duncan" is something you'll not regret.
If you want a day targeting a new species or learning a new skill then why not get in touch. Email is best, just let me know what you are looking for and I will do my very best to satisfy - duncancharman@me.com
What's trending over the next few months is - trotting a southern chalk stream for grayling, chub on flake/cheese, roach on punch, perch on either still or running water or if you really want extreme fishing - targeting a specimen rudd after dark at Frensham. Other favorites are zander at Old Bury Hill and roving a local river fishing the stick float for a mixed bag of roach, dace, perch and chub, however if you want to give me a challenge then I'll give it my best shot.....
Posted by Unknown at 13:47