Guiding days on the river Wye. 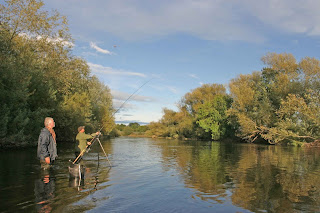 Just returned from a couple of rewarding days guiding two customers on the River Wye. Fishing two different Hereford and District beats the first day was a real shock to the system as my two customers had never fished the river before and found themselves knee deep in the river feeder fishing all day in heavy rain and a howling wind. The river was slightly higher than I would have liked and flowing through like the clappers which counted out float fishing but come late afternoon, in far better conditions, they had caught six barbel and six chub along with losing a few more than they should have.

Day two saw us move to a new beat, even I hadn’t fished before, a section that a past customer who now fishes the river on a regular basis had pointed us to. First cast, again on the feeder saw the traditional drop back bite result produce a barbel. It was the start of steady action throughout the day in which the duo landed a further dozen barbel, the best two going 7lb 15oz and 8lb 7oz. Not a bad day which was made even more rewarding when we found out from the bailiff that others around were struggling.

If you want to read more about this session and all my others during the month of September then keep an eye out for my monthly blog on my website – www.duncancharman.co.uk

If you are interested in a guided days fishing then just email me – duncancharman@me.com