The Grey Lady of Lac Serreire 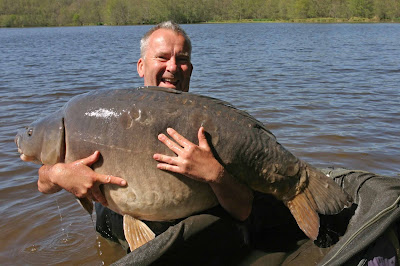 When my fishing buddy and fellow Nash Ambassador Chris Petter asked if I was interested in an all expenses paid trip to France to celebrate his 50th birthday I could hardly refuse. The target for him was to up his French personal best to hopefully a fifty, for me being an all-rounder, I was just happy to get away, spend some relaxing time in good company and hopefully bag a couple of thirties if I was lucky. 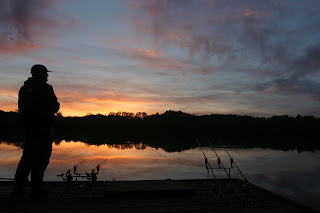 Our destination was Lac Serreire in the Coussac region of France, south of Limoges and some 450miles from Calais. It was 11.30pm on Friday April 21st when the doorbell rung and after a quick coffee we were on the road heading to the Eurotunnel in Kent, both not looking forward to the drive through the night, especially after a day in the office. Arriving in Calais in the early hours we hit the toll roads and with an 80mph limit we were soon eating the miles up, 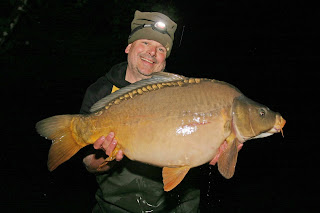 listening to Pink Floyd turned up load and trying to keep each other awake so that our estimated time of arrival of 1pm would be met. 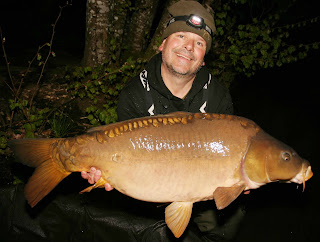 Arriving just before one and after an informative tour of the lake by the owner Simon Mansbridge we drew numbers for swim choice and yes you guessed it, I pulled out the last one! Fortunately Chris’s hand was slightly better and with the Shallows and Outlet swims going first we were left with a choice of the Middle, Woods or one of Tim and Mary’s. Chris decided on the Woods as this is the only swim on the far bank, one that has loads of options going for it and a swim that is good to double up in without reducing each other’s chances dramatically. Chris had choice of sides and amazingly went for the right hand side which is far shallower and generally provides more fish but usually smaller, yet it had done a seventy the previous week. I was left with deeper water, one that does fewer but bigger fish and the thought of blanking was going through my mind, especially knowing that the swim had only done two fish the previous week. Totally knackered from the lack of sleep and food, and with brains not functioning correctly we simply got a couple of rods out each, all on snowman rigs, cooked a curry and then hit the sack not expecting any action until the following day. 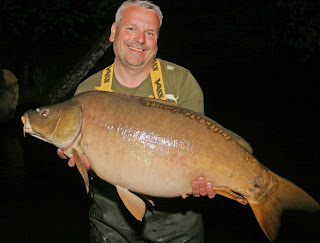 It was 2am when we were awoken by a one tonner which saw Chris bent into a fish which just plodded away not doing allot, something that big fish can do on occasions. In the net I could see that this carp was going be close to Chris’s goal as it was massive compared to anything I had ever witnessed. On the scales we could see it was agonisingly close to the fifty pound mark but both agreed that she, although a personal best, wasn’t quite there and settled at a weight of 49lb exactly. 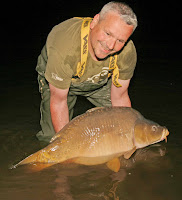 Morning dawned and
conditions didn’t look good as a ground frost greeted us along with clear blue skies and no wind what so ever. Over a brew we made our game plan and for me, who is often referred to as the ‘impatient angler’ it was going to be difficult as all I could do was place two rods in deep water at distance and wait along with working the other down the edge of the lilies to my left. Chris had opted to use 3.25lb t/c NR Toro rods loaded with 18lb NXT D-CAM line and also decided on placing two at distance in the hope of a big carp along with placing one on a green marker that lived in the lake, a consistent producing mark and where his night time capture had come from. With all rods refreshed come midday it was time to lay back and catch up on some sleep; however three hours later I was awoken to a single bleep on my middle rod and watched as the tip on one of my Pursuit rods silently pulled round. Winding like hell I finally caught up with the culprit which was by now had kitted some sixty yards to my left and was close to piling through the pads. It was make or break time as I knew if this fish found the pads then my chances were limited so clamping down on an already tight spool I tried to stop it but this fish had other ideas and just ripped  15lb mainline of the spool. I was now convinced it was a ton-plus catfish as the fight was that brutal and on looking at the line coming of the reel knew I had another problem as it had taken a serious battering either on an underwater obstacle or simply from the friction off the reel. I needed to get this line back on the reel, yet this fish decided to head straight back where it was hooked and just stripped line again. Finally after maybe fifteen minutes the fish was tiring and slowly coming closer and convinced it was a catfish almost fell over when the mother of all carp surfaced, shoulders out of the water, just wallowing slightly out of reach of the waiting net. It will be a sight I will never forget as I can’t really recall the rest of the capture, but the man hugs saw Simon racing around the lake on his bike to identify her as The Grey Lady, a carp usually around the eighty pound mark! On the scales the needle settled just shy of 79lb and we agreed a weight of 78lb 14oz, OMG! 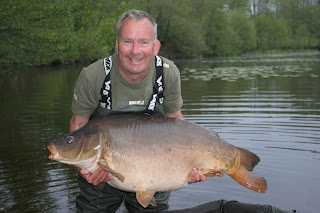 What was so rewarding from this capture is I had actually thought about bait and rig so instead of using a snowman rig had drilled out a 20mm Scopex Squid boilie and plugged it with 7mm rig foam so that it would counterbalance the weight of the hook and act the same as the freebies around it, very similar to what I try to achieve when crucian fishing. I’d also dropped the weight of the lead from a 3oz to a 2oz Long Ranger as I hoped that the length and weight of this wouldn’t sink into the heavy silt within the lake. The rig itself was copied from one which my good friend Jake Lund made up for me, specifically for this trip, and is what he classifies as a go-anywhere bottom bait rig. All I did was use Nash TT components which included an eight inch 20lb weed Comblink hooklink, size 6 barbless Fang X hook, a couple of blobs of Cling-On tungsten putty and a 1mm Blow Out Tube to make the bait come straight of the top of the hook. 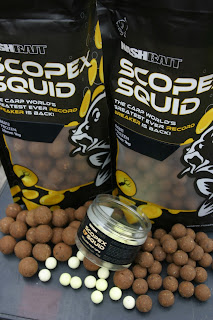 The next two days followed in similar fashion with Chris and myself taking two carp each. Chris’s went 42lb 14oz and 38lb 12oz the following night and myself one of 56lb 6oz at first light and a 39lb 12oz mirror in the early hours of Wednesday. Three of these carp fell during a short period when the wind changed from a chilly north to a warmer south westerly.  All these carp came to rods fished in the shallows or alongside the lilies, which wasn’t surprising as the carp were getting ready to spawn and nothing was coming to any angler fishing at distance to open water. Things then went quiet, probably due to the wind swinging once again to the north and after a day of constant heavy cold rain. The best part of three days past before we received anymore action with Chris taking two twenties, 21lb 12oz and 28lb during Thursday night when the temperatures plummeted to -5, a 32lb 7oz during Friday night and then one of 38lb 12oz on one of my rods just minutes before winding in whilst I was briefly away from my rods! 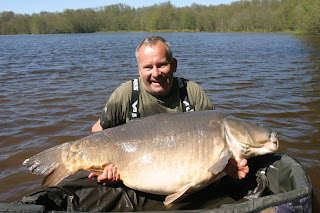 The fishery has a ban on the use of plastic and foam baits as these if lost create a 24/7 hookbait for a carp to pick up and if tethered easily damage or at worse cause a fatality. I consulted the owner so I could use a non-threatening counterbalanced bait using foam and try something different. The reason for my thinking was that most anglers seem to be using snowman rigs with bright pop-ups, and although they seem to produce their fair share of carp, I wanted to get away from this blatant obvious hazard and if a clued up carp did enter my swim then needed a bait that looked and acted to the freebies surrounding it. It might have only caught me one fish and the question whether it played any part in the downfall of ‘The Grey Lady’ but the reward in thinking about the situation, being slightly different whilst keeping with the rules was suitable satisfying.
Posted by Unknown at 09:27