Pike on the Wye 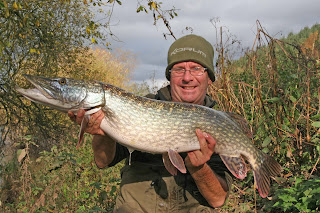 Apart from a dismal two-day trip to Chew last year, it’s been over a decade since l seriously targeted pike. My exploratory trips thou to the river Wye in search of barbel earlier in the year had revealed a few likely looking haunts and with the occasional large bow-wave spotted behind the odd unlucky dace, my mind started to wonder. Fortunately l have teamed up with another angler who like me wanted to unlock its secrets, so a two day trip was arranged and early one morning we headed north.
The first day was more about walking, looking and if we were lucky casting a deadbait which would be slowly retrieved in a sink-and-draw fashion. First port-of-call though was to Woodies to get the necessary tickets as well as draw on his wealth of knowledge, as if there was one man that could put us on fish, then Paul was our man. 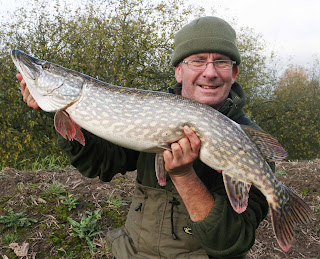 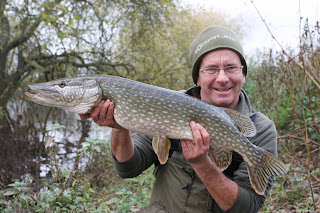 Unfortunately the place Paul wanted to send us was closed to the Wye three day festival, so with a couple of other stretches at our disposal and prime swims pinpointed we headed of with high hopes. The first swim we looked at and tried was a deep pool just above some shallows, home of a very large pike, yet an hour of working the swim failed to produce, so we moved to another stretch. I’d thought about the tactics that l wanted to try and this was to place a static deadbait within the swim, then sink-and-draw over the top. It’s a tactic that l have read about working for others and one that creates the best of both worlds as some days pike want a static bait and then on others they want it on the move. The second stretch we fished already had a few pike anglers on, one had taken three on lures, another had pulled out of a fish on the opposite bank, however with loads of bankside cover there were plenty of swims to try, yet these were tight, features either side, and thoughts of hooking a big pike at first was somewhat daunting. Id rigged the static deadbait up on a Korum 2.75lb Carp rod with 40lb braid loaded onto a KZR Mini Pit 6000, a couple of drilled bullets to hold bottom in the slack created by the cover along with a Snapper size 6 trace witch held a sardine, my favourite deadbait. The sink-and-draw rod was toned down to a 1.75lb Neoteric XS Twin Top with the same reel and braided main and this time a smelt was mounted on a size 8 Snapper trace. Because l was going to move swims and the differences in the flow l weighted the bait by sliding a length of pole float rubber onto the braid, then pinched swan shot on. The rubber protects the braid and the weight can be altered with ease. With the deadbait positioned l started to work the smelt over the top, yet after twenty cast nothing had happened. Down to my left was a big snag which allowed a risky cast right down the edge in just a few feet of water. The cast was bang on and after just two turns of the reel l watched as a good double shot out and grabbed the bait. A tense fight commenced before she was netted and l punched the air as it was my first Wye pike. Twenty minutes later we were on the move again, searching different swims and watched as another angler netted what looked like a twenty on the far bank. Keen to keep on the move we headed upstream, yet the odd likely looking spot failed to produce, however a swim mentioned by a barbel angler had to be investigated and once again the smelt did the business, this time on the first cast with a pike around six pounds. The light was going and having found numerous swims for future reference we headed back to the B&B in Ross. 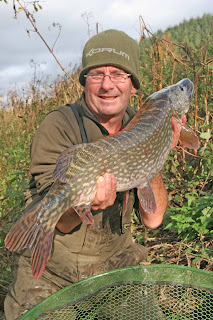 The alarm sounded well before dawn and with a couple of hours before breakfast we tried another spot well known for pike. This section looked great, yet our efforts went unnoticed, however an angler had arrived just before us, settled in a swim and caught a low double plus missed a run, so it certainly wasn’t time wasted. After breakfast we headed back towards Hereford and l dropped into the swim that had produced the double the day before. This time the sink-and-draw failed to produce so l added just enough weight for the rig to hold bottom and carefully cast it, once again under the snag. I’m not a great lover of using alarms and drop of indicators, much preferring to watch the rod tips for a signs of a pickup. I didn’t have to watch for long as the left hand rod tapped before the clutch started to turn. A firm lift was met with a satisfying curve on the rod and soon l was admiring another good double. Soon after a recast the same rod signalled another bite and as soon as l lifted into this fish l knew it was far bigger. She tried to make the upstream snag a couple of times and l had to clamp down on the clutch, yet the rod turned her and after an explosive tense fight l found myself looking at what l thought was my target, a twenty pound Wye pike, yet the dial on the scales dropped short, yet was l disappointed, no way. The swim died after this so we decided to head to another stretch to locate an area that’s known for producing. Leaving the tackle in the car we found the swims, yet due to the long walk we decided to keep these for another day and headed back into Hereford to watch the weigh in as well as talking to the match anglers to see if they were experiencing any pike trouble, which they were, however after the match had finished our sardines were totally ignored as these pike were feeding on the vast shoals of dace and roach. 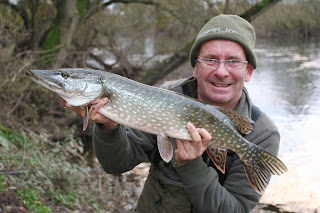 Having learnt so much, located numerous swims for the future and with a few pike under my belt l left a happy angler and thoughts of a return visit were already floating around in my head.

It’s a great start in locating areas to take customers pike fishing on the Wye. Earlier this year l started guiding on the Wye for barbel and in two incredible weeks, one in September, the other in October we took more than one hundred barbel, as well as loads of chub. Next year as well as the two weeks barbel fishing, l will be available to guide pike anglers on this incredible river as well as fishing for dace, so if you a couple of days of contrasting fishing, why not get in touch and book you’re spot!
Posted by Unknown at 01:32